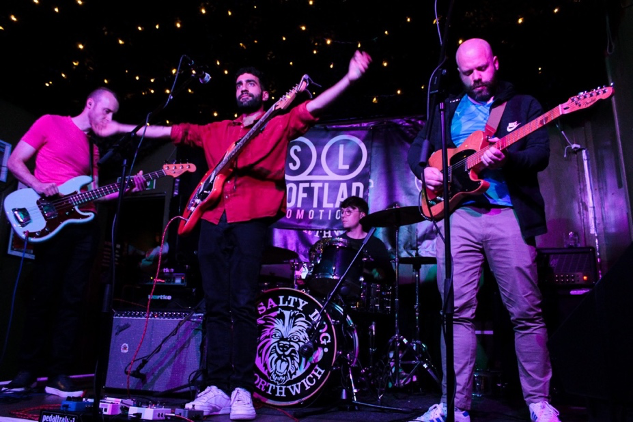 The Groan Room band are back again and they’re coming your way making some noise!

Take a ride through the 90s with the quirky blokes from North England as their noise rock track takes you on a retro guitar-driven roller coaster of sound. For fans of bands like Nirvana and Weezer with an open heart to The Velvet Underground.

The band Groan Room is back at it with a new single called “Holy Ravioli!”. It was recorded and produced by Gary Hadfield at Blueprint Studios, Salford in December 2021, the song is a blend of nonsense, in a good way, and noise.

Obviously, as mentioned by the band, they sound different. Hey! It’s noise rock, seems like some old-fashioned guys who know better than messing about behind the scenes.

“It’s a blend of nonsense and noise. Just sounds like a bunch of blokes who are old enough to know better mucking about in the back room”

The band is based in Salford, England, but they’ve got roots in North England.

The band has been active for quite some time now, and has put out several other singles before “Holy Ravioli!” Their most recent release came out last month, so fans have been waiting for this one for a while now!

The grungy and British sound of Groan Room is influenced by the 90s – grunge and pop with slacker rock thrown in. A four-piece of Salford-based musicians cut their teeth on the North West’s band scene before starting together.

Life and its terrible hardships are mocked throughout these songs full of sarcasm and irony. The lyrics address the unsettling angst brought on by one’s mid-late twenties, and its presence is also evident in the screeching and groaning of distorted guitars and the furious energy of the band’s drumming.

Across the pond, the Groan Room visited the iconic Abbey Road Studios to record their debut, three-track EP in March 2020.

If you’re into alternative rock or noise-rock or even slacker rock (we don’t know what that means either), then check out Groan Room’s latest single and follow the band on Spotify!